One person has died and another has been taken to hospital following a bungalow fire in Telford this morning. 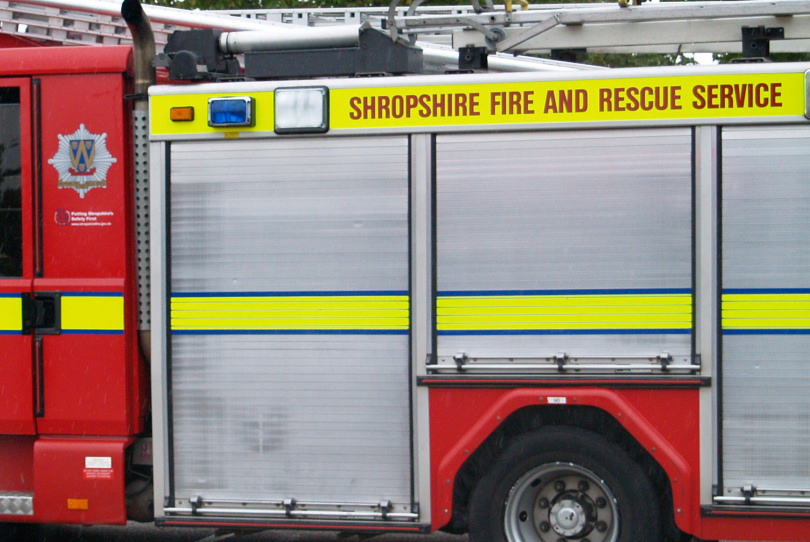 Three fire appliances from Telford Central and Tweedale along with an operations officer attended the property on Park Lane in Woodside at around 7.15am.

Shropshire Fire and Rescue Service said that on their arrival crews were confronted with a bungalow that was well alight.

Breathing apparatus teams with hose reel jets were committed into the building to try and locate two people who were reported as missing by neighbours.

Crews managed to locate and rescue a lady in her 80s before being forced to withdraw from the building as the roof collapsed.

Firefighters then recommitted back into the building in the aftermath of the collapse to look for the remaining missing person, crews found a body which was pronounced as deceased at the scene.

A West Midlands Ambulance Service spokesman said: “On arrival, crews began treating an elderly woman who had been rescued from the property by firefighters.

“Thankfully her injuries are not believed to be serious, but she was taken to Princess Royal Hospital for further assessment.

“A second patient was then rescued from the house by the fire service. Unfortunately, due to the nature of the injuries they had suffered, it quickly became apparent that nothing could be done to save them, and they were confirmed dead at the scene.”

Shropshire Fire and Rescue Service says that early indications are that the fire is not suspicious however this is only a preliminary finding.

Community Fire Safety guidance and reassurance work will be carried out in the area throughout the weekend.

West Mercia Police was also called to the scene of the fire.

January 18, 2020
Armed Police attended an incident at Tesco Extra in Shrewsbury on Saturday afternoon, following reports of a man on the roof of the store with a firearm.
Read Article

January 18, 2020
Emergency services were called to the River Severn in Shrewsbury in the early hours of Saturday morning after a man was in the water.
Read Article

January 17, 2020
Sam Ricketts will be keen to ensure his players focus on league matters when they visit Joey Barton’s Fleetwood.
Read Article

Growth in demand for commercial property services at law firm

January 17, 2020
Shropshire-based teddy bear manufacturer Merrythought is celebrating nine decades of business in 2020 with the launch of a limited-edition bear to kick off its 90th year.
Read Article

January 17, 2020
Work has begun to create the infrastructure to support a world leading agri-tech research and innovation hub on the edge of Newport.
Read Article

Growth in demand for commercial property services at law firm

January 16, 2020
A Shropshire law firm has expanded its commercial property team as demand grows across all of its offices - from Oswestry and Telford to Ludlow and beyond.
Read Article
Load more

Shrewsbury Town in the Community to launch ‘Challenge Yourself 2020!’

Shrewsbury Town in the Community to launch ‘Challenge Yourself 2020!’

January 8, 2020
Shrewsbury Town in the Community are launching ‘Challenge Yourself 2020!’
Read Article

January 7, 2020
A Telford schoolboy is making ‘bubbles’ in the world of Scuba Diving after becoming the youngest person to be awarded a Junior Open water scuba Diving scholarship from a local charity.
Read Article

January 7, 2020
A top prize of a night at the Hilton Hotel in London’s Canary Wharf awaits the winner of the star raffle prize at a quiz night being held to raise funds for a Shropshire charity.
Read Article
Load more

Jack and the Beanstalk a giant success for The Place Telford

January 16, 2020
Samantha Womack and Tom Chambers will star in a brand-new production of the classic thriller, Dial M for Murder at Shrewsbury’s Theatre Severn this June.
Read Article

Jack and the Beanstalk a giant success for The Place Telford

January 10, 2020
This season’s pantomime at The Place Telford, Jack and the Beanstalk, has been its most profitable and successful yet.
Read Article
Load more

January 17, 2020
The full English breakfast has been backed by a Shropshire hotel and brasserie despite a recent poll suggesting the fry-up could be on its way out.
Read Article

January 17, 2020
A Shropshire chef is due to appear on a brand new television show next week.
Read Article
Load more
- Advertisment -