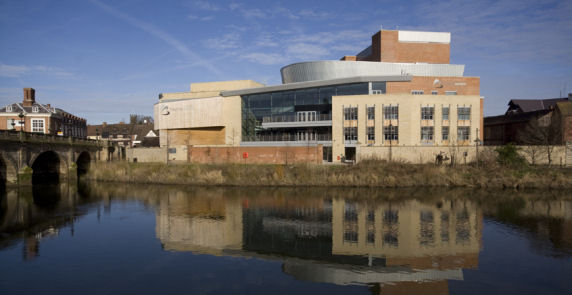 Annual attendance at Shrewsbury’s Theatre Severn has increased by more than 10%, the venue announced this week.

Audiences from Shropshire and beyond visited the riverside theatre to attend hit productions such as The Mousetrap, The Kite Runner, Jeeves & Wooster, a first visit by Birmingham Royal Ballet, and a host of sellout performances by popular acts such as Dawn French, Al Murray, Milton Jones, Paul Carrack and Joan Armatrading. Approximately a third of attendees visited the venue from outside Shropshire.

David Jack, Theatre Severn manager, told us: “We enjoyed a very busy year and are thrilled by the increased attendance figures. In total Theatre Severn hosted 450 performances last year, including more than 100 produced and performed by local amateur companies, organisations and performers of all ages, based here in Shropshire.”

During the same period, attendance at sister venue The Old Market Hall Cinema rose by 13.6%, with annual ticket sales exceeding 60,000 for the first time since opening in 2004. In the past 12 months, the two venues, both owned and operated by Shropshire Council, attracted a combined total of 221,602 visitors to Shrewsbury town centre, an increase of more than 22,000 on the previous year.

Craig Reeves, Marketing Manager, added: “The continued success of these relatively new venues could not be achieved without the fantastic support of local audiences. We look forward to welcoming everyone to Theatre Severn in the months ahead and will announce details of a number of big shows for 2016 later this year.”

Earlier this year, the venue also broadened their programme with the introduction of live screenings from the National Theatre and Royal Opera House in the 250-seat Walker Theatre.

Shropshire Live has been providing Shropshire news and entertainment since 2009.

We reach tens of thousands of readers per month, making us the biggest online-only news publication in the county.

You can now also listen to Shropshire Live.

Read more about us.

For general enquiries and press releases email interact@shropshirelive.com or call 01743 818 095.

Shropshire Live is regulated by IMPRESS: The Independent Monitor for the Press CIC.

Other uncategorized cookies are those that are being analyzed and have not been classified into a category as yet.

Performance cookies are used to understand and analyze the key performance indexes of the website which helps in delivering a better user experience for the visitors.

Advertisement cookies are used to provide visitors with relevant ads and marketing campaigns. These cookies track visitors across websites and collect information to provide customized ads.

Analytical cookies are used to understand how visitors interact with the website. These cookies help provide information on metrics the number of visitors, bounce rate, traffic source, etc.

Save & Accept
Powered by