Oh my! It was one of the hottest tickets in town on what happened to be the hottest week of the year. A superb evening of songs – and of thongs! 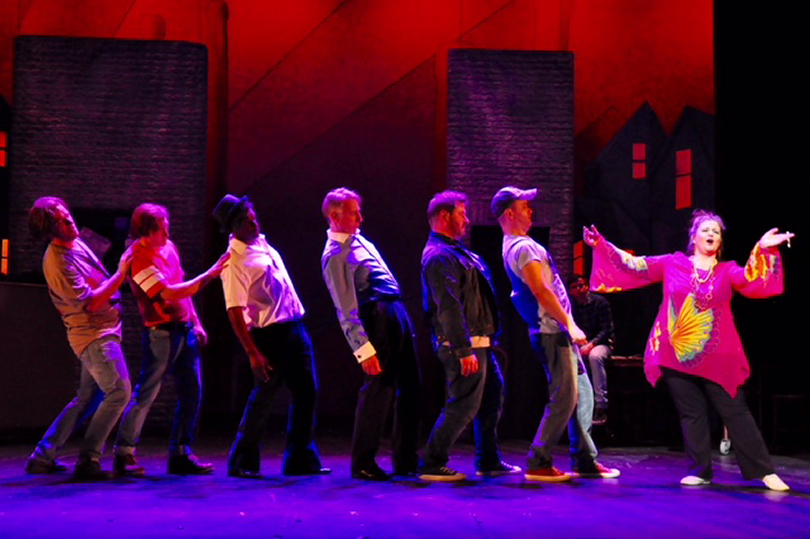 Mad Cow Production’s amateur version of the Broadway hit The Full Monty certainly put the sizzle into sizzling at the Theatre Severn in Shrewsbury!

It had everything. Hot performances, hot lighting, hot music, hot choreography – and ‘hot’ men of all different shapes and sizes clad only in teeny, tiny, thongs! Phew – there was no holding back – it certainly was a ‘full monty’ production!

They say that fortune favours the bold and this was without doubt, the Shropshire theatrical herd’s best and most daring production to date – from the staging to the subject matter. And the public responded – sell-out shows in the main auditorium at Theatre Severn, and standing ovations. It’s sold out status meant that the Herd was gifted two professionals from London to help with the production – upcoming Lighting Designer Dan Saggers and Andy Hinton as Sound Designer (taking a one week break from a run at The Royal Court).

The musical version of The Full Monty is based on the British smash hit starring Robert Carlyle, only it is Americanized and based in small backwater town Buffalo. It follows the highs and mainly lows of six unemployed steelworkers who decide to present a strip act at their local club after seeing the reactions of their wives to a touring production of the Chippendales. There is, however, one massive difference – the Buffalo boys were going further – performing the full monty!

The show leads us through the twists and turns of emotions as best friends Jerry Lukowski (Mathew Robinson) and Dave Bukatinsky (Jez Mann) recruit to their act to earn a quick buck so that Jerry can continue to see his son. Their friendship is wonderfully portrayed – warm, funny and believable. The scenes as Jerry and Dave recruited to their ‘cause’ were the some of the best in the whole production – genuinely laugh-out-loud funny with some superb acting in various stages of undress!

The cast was perfectly cast – with polished performances from ‘the women’ including Heidi Brown as Georgie, Natalie Watts as Vicki and Anette Edge as Jeanette on a set that was worthy of a Broadway production.

This whole show is all about friendship and camaraderie, and I have a feeling that this sums up the Mad Cows in general – an amateur theatre company with very professional standards.

And to answer one burning question – director Alex Hinton has confirmed that ‘the brave six’ did what it said on the tin at the show’s finale – and whipped off the hats that were protecting their modesty. We, the audience, would never have known thanks to the very clever lighting that ‘flashed’ just at the right time!

So hats off to those that took their hats off!

July 3, 2020
Do you need a skip or trade waste disposal solution? With a modern fleet of over 20 vehicles and a dedicated customer-focused team, Cartwrights can provide the service you need.
Read Article
- Advertising -

August 13, 2020
Heavy rain caused flash flooding across parts of Shropshire last night as the county was hit by another storm.
Read Article

August 13, 2020
The A49 north of Shrewsbury was closed on Wednesday evening after a car collided with an electricity pole and building.
Read Article

August 12, 2020
Simon Kerrigan has sealed a return to the first-class game by signing for Northamptonshire.
Read Article

August 12, 2020
Telford Tigers are delighted to announce the return of club captain Jason Silverthorn for the 2020/21 season.
Read Article

August 12, 2020
Bookings at some of Shropshire’s most popular holiday spots have seen a huge spike in the past month, says Visit Shropshire, with a high number of tourists choosing to stay at home, rather than travelling abroad.
Read Article

August 12, 2020
Shrewsbury-based Yarrington Ltd is helping to improve the ability of Kayak 4 Heroes expedition to engage with members of the public and potential sponsors.
Read Article
Load more

August 12, 2020
A rare and dilapidated 18th century cottage in Telford has been brought back to life following a restoration project.
Read Article

August 4, 2020
Polka Dot Travel in Market Drayton has temporarily swapped Trustpilot for toddlers as it hands its reviews over to its youngest travellers.
Read Article

July 30, 2020
From types of councils to council cabinets. This is your guide to Shropshire and Telford & Wrekin Councils.
Read Article
Load more

August 12, 2020
Professional and amateur artists are due to compete in an inaugural online show celebrating the best of the county, with the chance to have their work displayed at an exhibition at Weston Park this autumn.
Read Article

August 5, 2020
Coronation Street’s Geoff Metcalfe, actor Ian Bartholomew, joins stars of stage and screen who have generously offered their time to take part in ‘Shropshire’s Got Talent’, an exciting online competition open to all.
Read Article

July 29, 2020
An English Bitter from a brewery in Shrewsbury has beaten almost 500 different beers from across the UK to be named overall Gold at the inaugural SIBA Digital Beer Awards.
Read Article