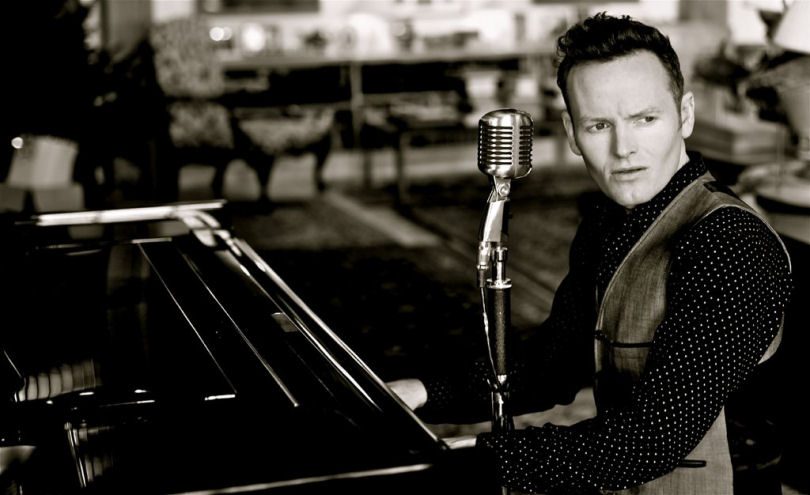 Singer and musician, Joe Stilgoe brings his tour to Shrewsbury School this Friday. Jenna Feasey spoke with him about his latest album New Songs For Old Souls, his musical inspirations, and making his West End debut.

Having grown up in a musical family, did you take an interest in music early in life?
I have always been involved and interested in music but was actually a bit rubbish at it for a long time, which was probably quite disappointing for my parents! We all loved music but never really thought of it as the family business so to speak. It was when I was in my early twenties that I really began to pursue it.

Your latest album is called New Songs For Old Souls – what is the inspiration behind it?
As a jazz musician I’ve always been inspired by the music of the 1930s, 40s, 50s, and 60s, which, as the years go on, becomes somewhat historical. Rather than simply rehashing old music, I wanted to write something new that was inspired by it. The songs on the album take inspiration from the music of Cole Porter, Frank Sinatra, Georgie Fame, and The Beach Boys, who I also cover on the album.

How are you feeling about your upcoming tour?
This will be my first extensive tour, taking place over the course of two months and covering the whole country. It’s great to get out of London, meet new fans, and play to new audiences at new venues who can sometimes be more appreciative. My band is made up of world class musicians and we have eagerly been playing throughout the year in preparation for this – performing is when everything will come alive.

What can audiences expect from your show?
I will be performing all new songs from my current album which have not been performed to Shrewsbury audiences before. Hopefully there will be a mix of both new and familiar faces in the audience. I think that they will just have a good time listening to the music as there’s something for everyone, there’s romance and there are songs with a story.

What would you consider to be the highlight of your career?
The opening night of High Society. I would open the show playing at the piano, I had an American accent, and had to ask the audience for song requests which I would then play on the spot. I was a bit scared that this may not work, but thankfully the audience loved it from the very first night; it was an amazing experience for me.

Would you take part in a West End production again?
That would certainly involve less travelling. High Society was incredible and my first taste of the West End, as I’ve performed one-off gigs in London but it’s completely different to having been cast in a West End production. I thought I might become bored during its run, but I loved every minute of it and the final performance was just as fresh as the opening night. Whilst I would not want to stop performing gigs, if the right opportunity came up then I’d love to do a West End show again and would make sure to fit it in my schedule.

June 2, 2020
Police are appealing for anyone who has CCTV or witnessed a large fire on Halesfield industrial estate in Telford on Sunday to come forward.
Read Article

June 2, 2020
Following the deaths of two men in Bridgnorth on Thursday 21 May police have today named the second man who died.
Read Article
Load more

May 29, 2020
Tribute has been paid to Shropshire’s Cathie Sabin OBE, the LTA’s first female president, who was was an inspiration and a friend to many.
Read Article
Load more

June 1, 2020
A Shropshire-based businessman, who has just reopened his oven valeting business, will donate 10 percent of his first three months’ takings to Severn Hospice.
Read Article

June 1, 2020
Companies looking to return back to work safely can tap into a new service launched by In-Comm Training that will help them become ‘Covid-19 Secure’.
Read Article
Load more